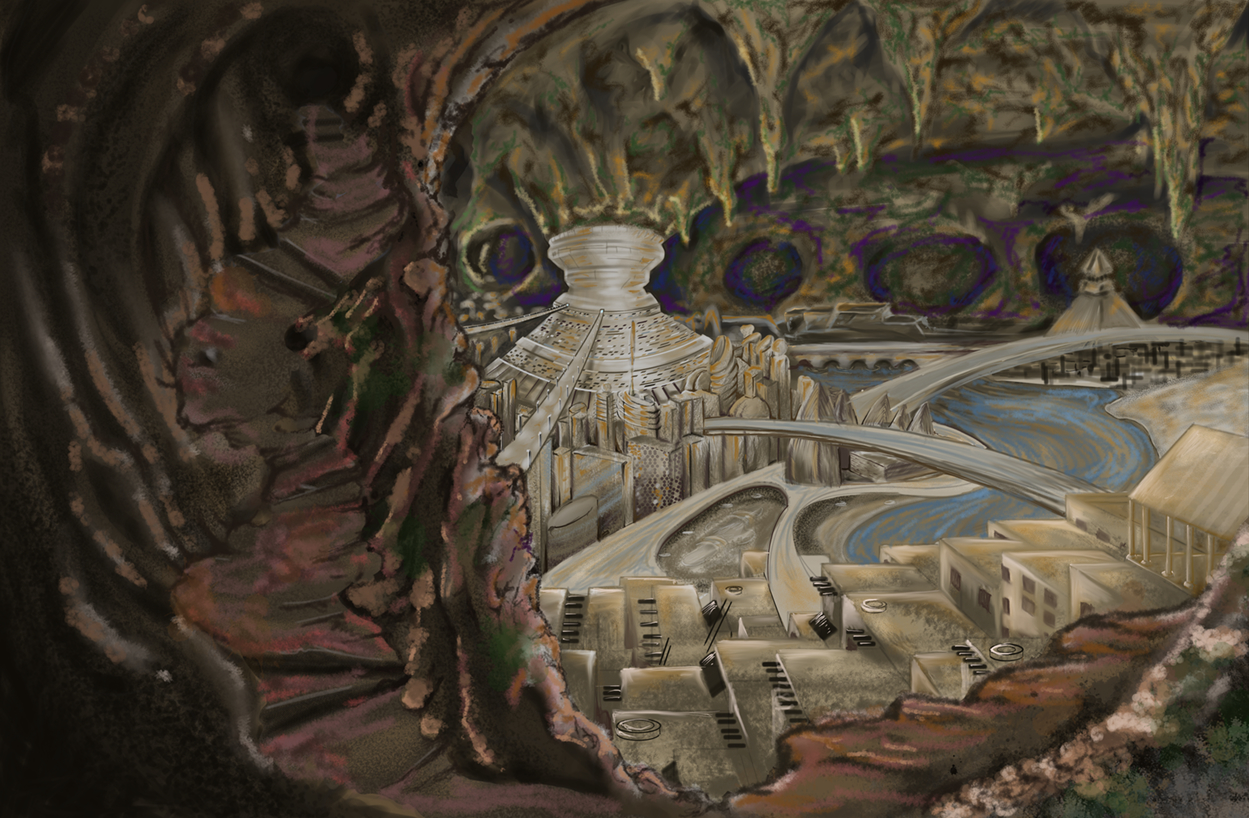 This conceptual city environment is part of a short film project I am making as a one man animation production in 3D. It is meant to be a subterranean city. I started the sketches in traditional form, with pencil and paper.

I then scanned those sketches (multiple ones) and started working on Photoshop. I later transfered the file to the iPad and used Procreate. The iPad, and for that matter the Surface and Android tablets have made mobility impressive. Very affordable for professional artists. But most still have to be used with proprietary software. Open source is still not very well supported, and the iPad is not even possible to run Krita!

But the fact that I can connect the iPad now to the Mac and use it as a Cintiq, which I have in the studio, is an amazing technology. It means that now I have a mobile studio and a static studio where the workflow is not interrupted.

My process starts with unrecognizable sketches. That is, unrecognizable by other’s standards. I am looking for composition at this stage and use colors to balance my work.

Some times this stage takes minutes other times it takes days. But it is a fun and necessary phase on my work. 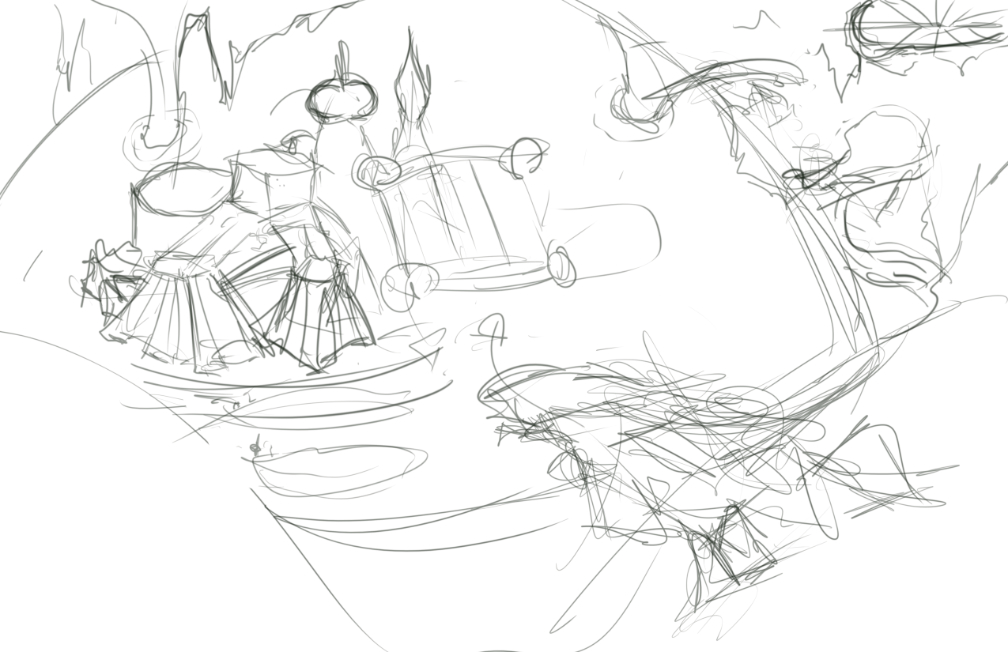 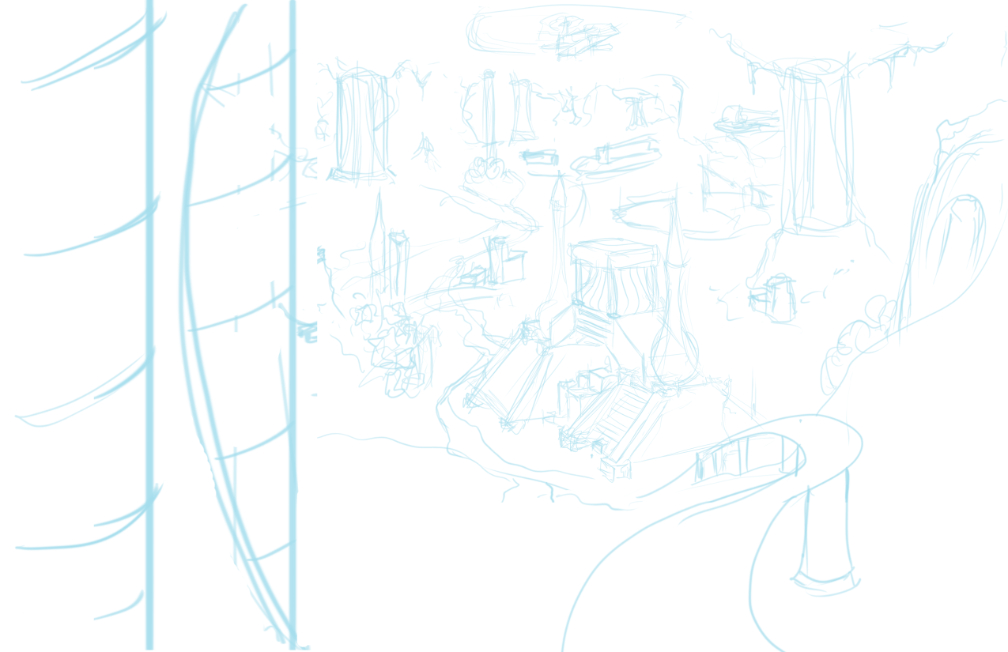 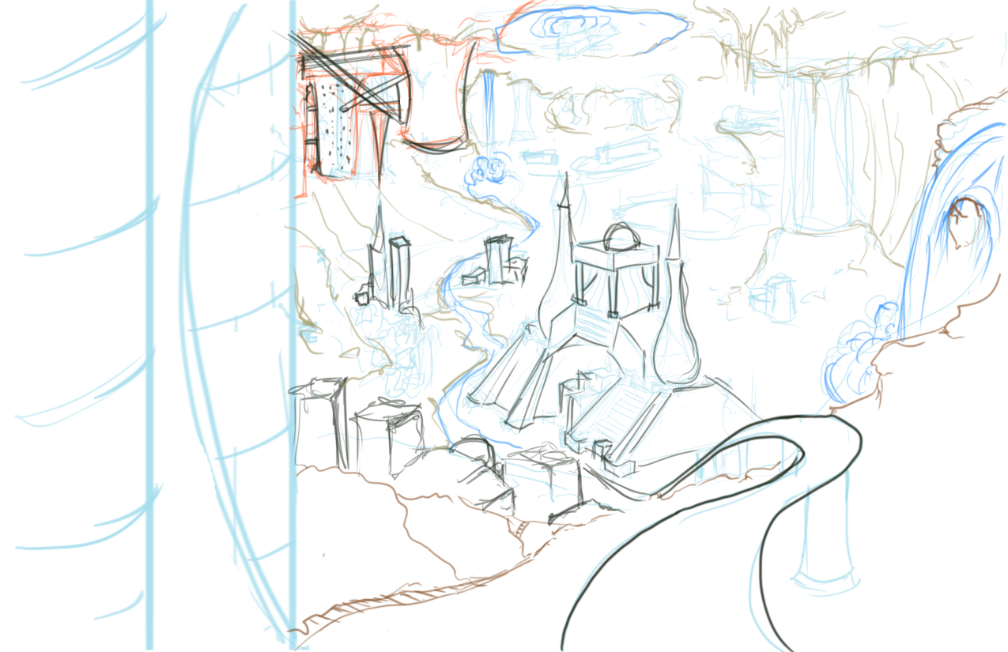 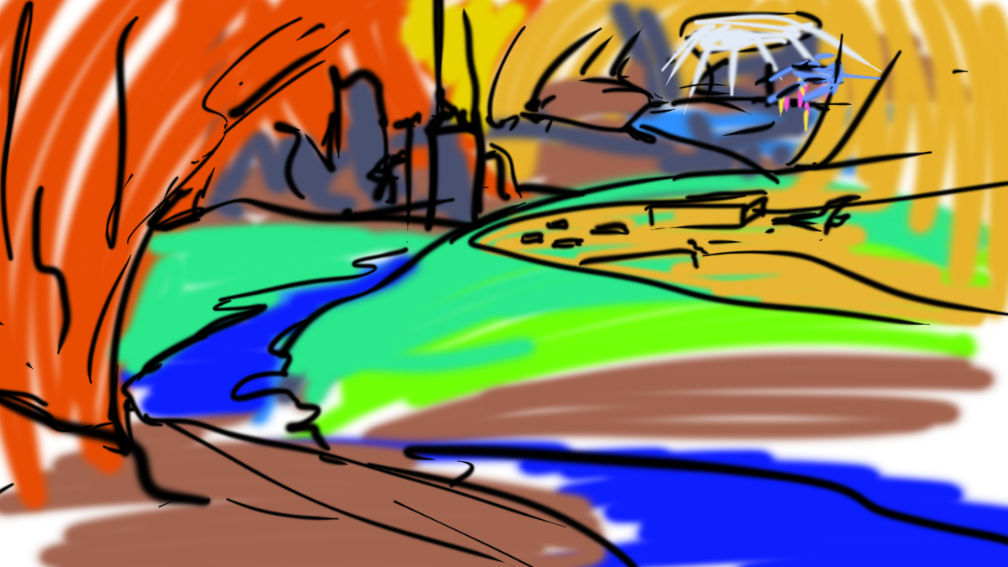 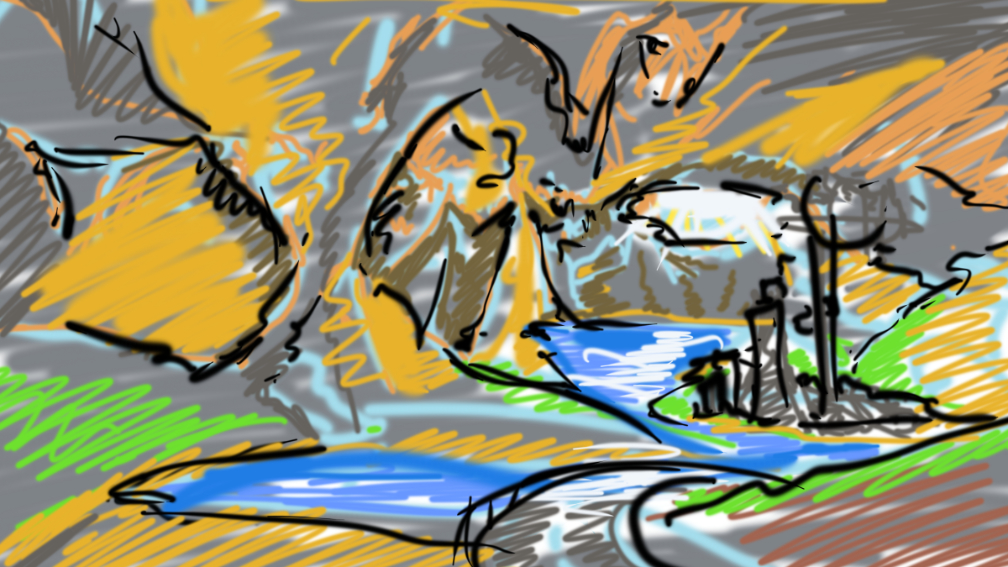 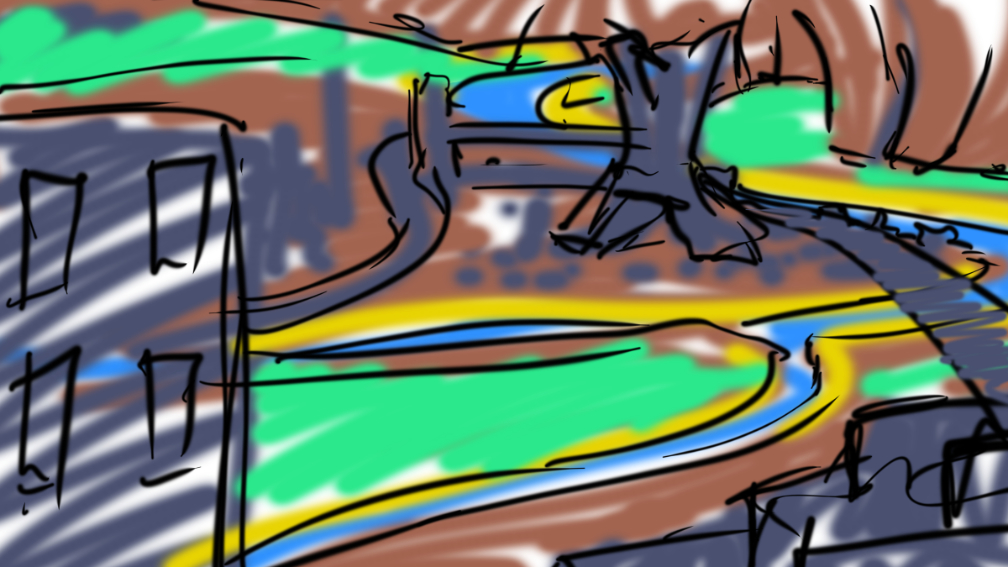 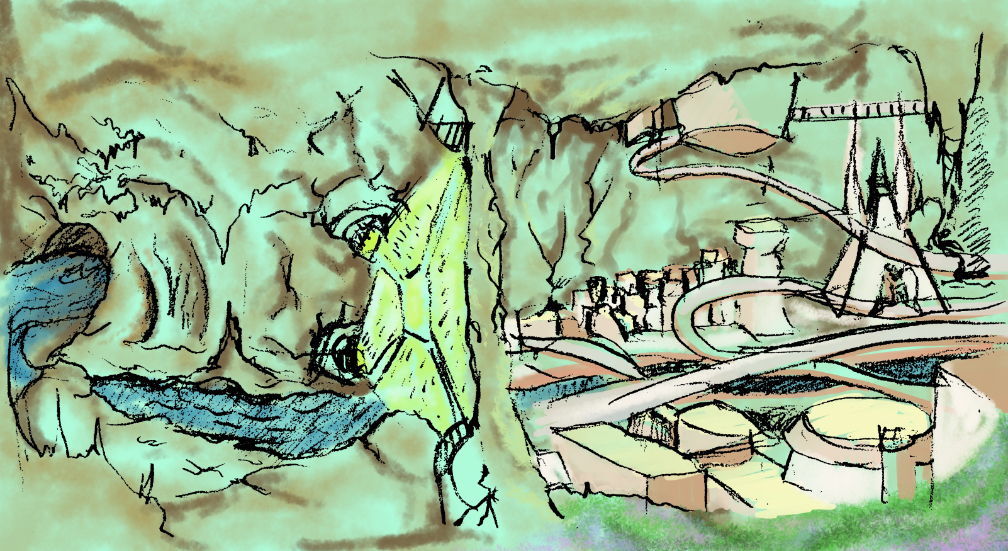 After working on regular paper and pencil media my sketches end as scanned files on the computer. Here you can see the start of the tracing of the scanned art and some shading of areas.

Once I had it digital, I used Sketchbook Pro to organize the lines and make some precision marks. 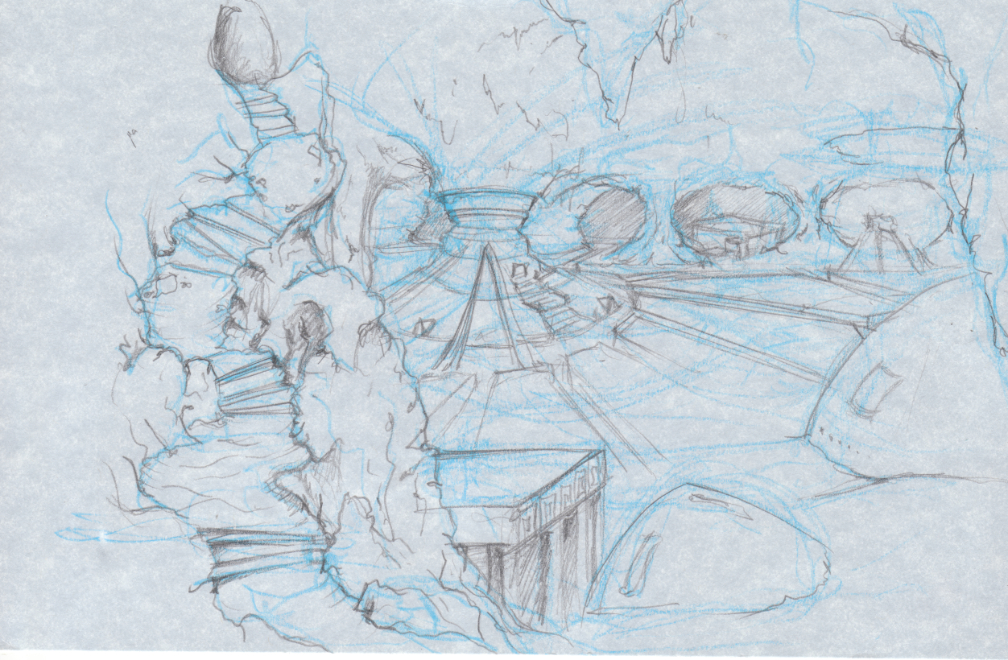 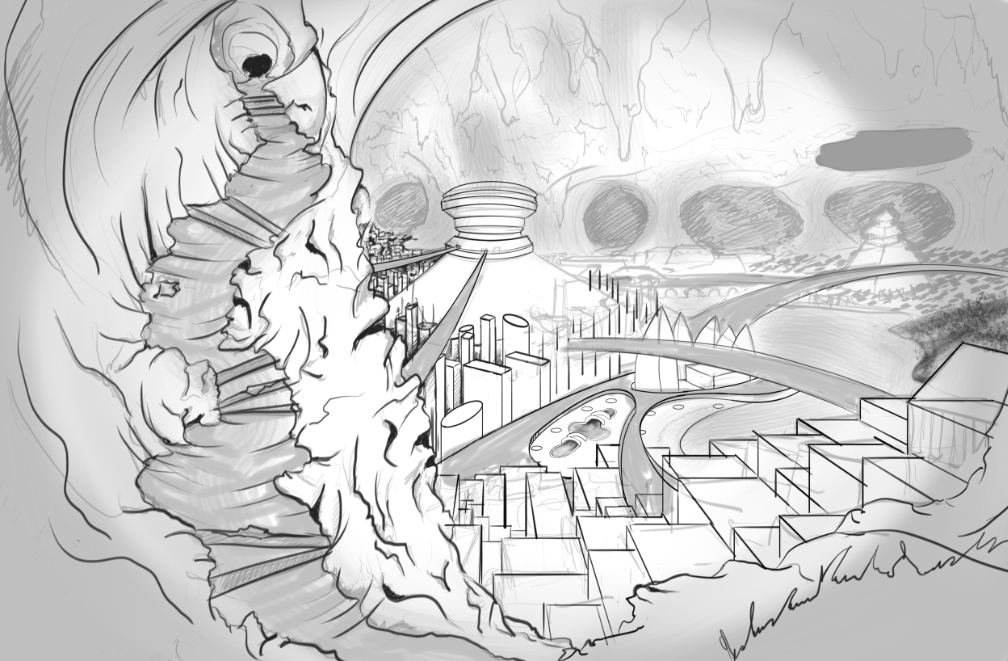 On this phase of the work I work contrast, textures, and clarify outlines that will most likely be gone on the last step, but that help to finalize the overall look. Once I am satisfied with what I see then I get busy with color palettes but this one was to be muddy, and obscure. 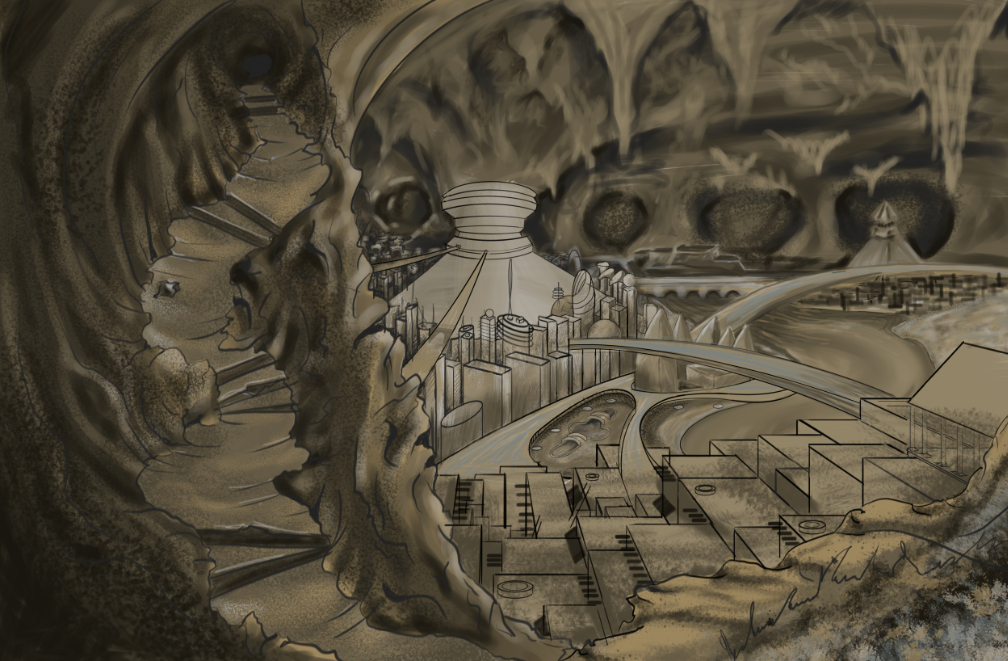 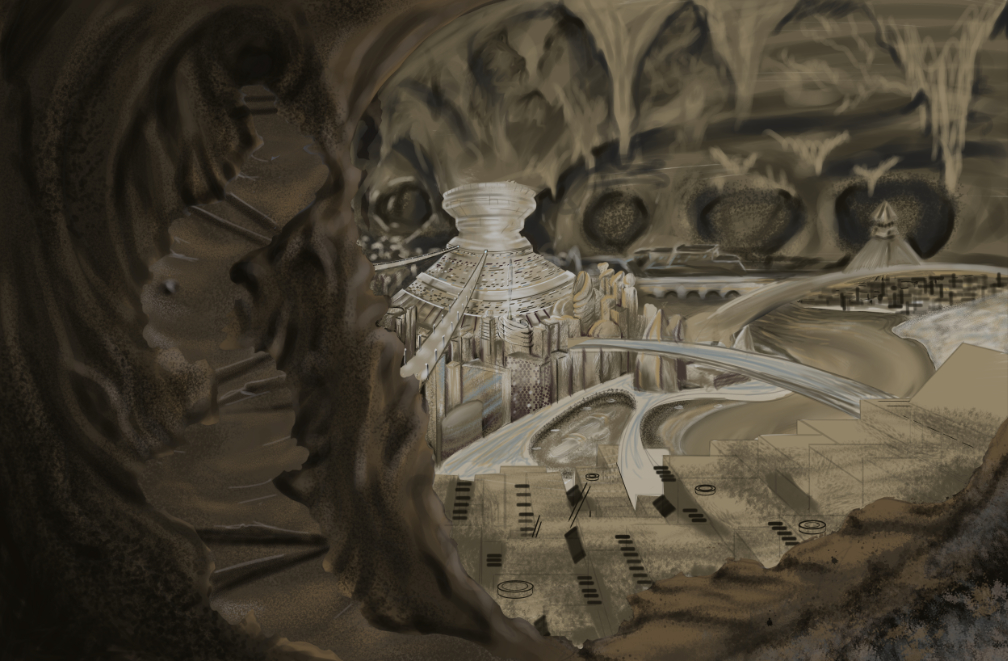 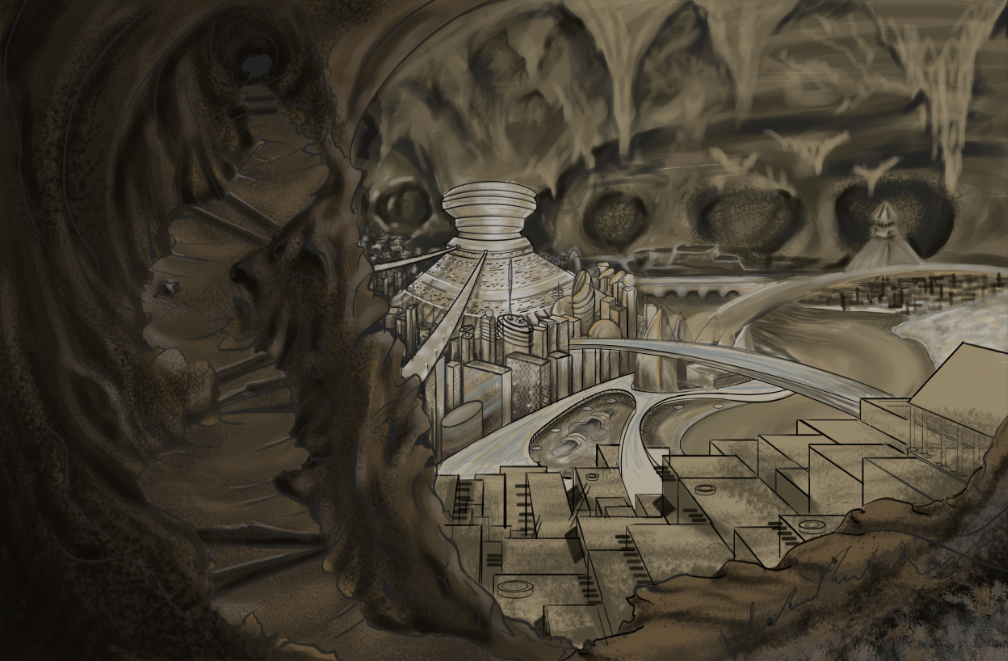 First I set all dark and light, then refined lines and blocked some with colors and shapes. Fixed highlights and set blues on shadows. Then added the extra colors without overwhelming the muddy tone.

As a concept design, it is a done deal. This passes now to be built in 3D for the film that I am working on with Blender. 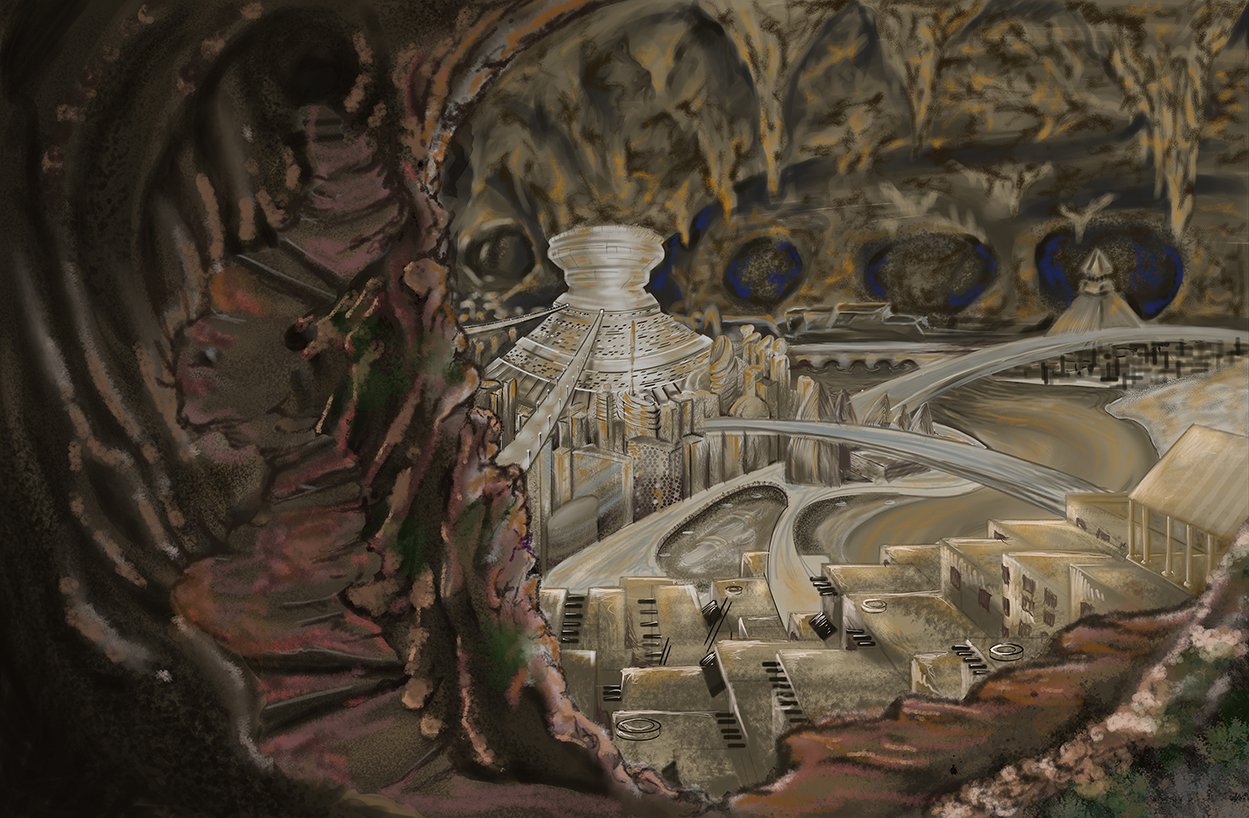 This site uses Akismet to reduce spam. Learn how your comment data is processed.

We use cookies on our website to give you the most relevant experience by remembering your preferences and repeat visits. By clicking “Accept”, you consent to the use of ALL the cookies.These are the Cookies.
Cookie settingsACCEPT
Manage Consent

This website uses cookies to improve your experience while you navigate through the website. Out of these, the cookies that are categorized as necessary are stored on your browser as they are essential for the working of basic functionalities of the website. We also use third-party cookies that help us analyze and understand how you use this website. These cookies will be stored in your browser only with your consent. You also have the option to opt-out of these cookies. But opting out of some of these cookies may affect your browsing experience.
Necessary Always Enabled
Necessary cookies are absolutely essential for the website to function properly. This category only includes cookies that ensures basic functionalities and security features of the website. These cookies do not store any personal information.
Functional
Functional cookies help to perform certain functionalities like sharing the content of the website on social media platforms, collect feedbacks, and other third-party features.
Performance
Performance cookies are used to understand and analyze the key performance indexes of the website which helps in delivering a better user experience for the visitors.
Analytics
Analytical cookies are used to understand how visitors interact with the website. These cookies help provide information on metrics the number of visitors, bounce rate, traffic source, etc.
Advertisement
Advertisement cookies are used to provide visitors with relevant ads and marketing campaigns. These cookies track visitors across websites and collect information to provide customized ads.
Others
Other uncategorized cookies are those that are being analyzed and have not been classified into a category as yet.
SAVE & ACCEPT
Powered by

Sorry, this is copyrighted, just link to the site if you want to share.Thank you for your support!